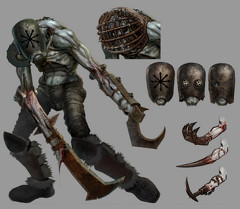 Flayerkin are twisted Chaos Marauders who have replaced their hands with wickedly sharp hooks and claws. These claws serve a dual purpose: First, they are extremely effective weapons, as they are an extension of the Marauder’s arms. Second, they allow the Flayerkin to gain purchase on nearly any vertical surface.

In addition to their modified limbs, Flayerkin are draped in ropes and chains that they use to help their brethren in the scaling of sheer surfaces, such as keep walls. Even a dead Flayerkin can be used as a sort of organic siege ladder for the other members of his warband, and indeed were in the Storm of Chaos. 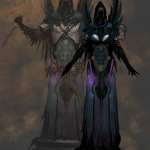 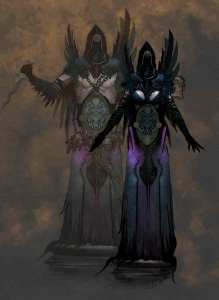 Chaos Cultists are a new type of Monster to include in your games of Warhammer Quest. Warhammer Quest Cultists  can be used at any Battle Level, and can be included in either a custom Monster Table of your own creation or can be added to a custom Event Card.

Within the Empire and the other nations of mankind, secretive cults gather in towns and cities to worship the gods of the Realm of Chaos. In times of peace the Chaos Cultists go about their daily lives as normal, living undetected as regular citizens, whether they be lowly beggars or high class nobles, but always striving to gain the favour of their Dark Gods and undermine civilisation from within. It is only when the forces of Chaos approach from the frozen North that these cults reveal themselves, fighting for their dark masters from within the Empire.

Demagogues – Orators without peer, Demagogues use their charisma and talent to spread discord and chaos through society. These fiery individuals are utterly devoted to the Ruinous Powers, and often form the centre of an insidious band of Cultists.

Warlocks – There are always those wretched individuals among the seething masses of humanity who devote themselves to the search for forbidden knowledge and power. Some of these succeed in learning to wield the Winds of Magic in their most corrupt form. This is highly dangerous as these hedge-wizards do not normally have the skill or experience to control their magic unlike the more dedicated practitioners of Chaos Magic like Chaos Sorcerers or even Beastman Bray-Shamans.

Mutants – In the lands of civilized men, mutations are less frequent than in the north, but still appear quite often. In places such as Sylvania or Mousillon where Dark Magic is stronger, mutations are even common. These mutants are often killed at birth or hidden from the spying eyes of the Order of Sigmar in the Empire or the Fay Enchantress in Bretonnia and other like-minded institutions in other nations. If they survive the hunt, they have to live a hidden life and flee into remote places where they band together creating groups of mutants ranging from people with small marks to the Beastmen and much worse. When the power of Chaos rises, they might take up arms and break free from their hidden existence to execute their revenge upon a civilization from which they were banished.

Catechisms of Hate: A Warrior attacking the Demagogue is distracted by a constant tirade of hate-fuelled abuse, or silver-tongued heretical arguments and taunts. Each turn, before rolling to hit the Demagogue you must make a Willpower Test for your Warrior (1D6 + WP, 7+ to pass). A pass indicates that the Warrior is unaffected by the rants of the heretic and may attack normally – there is no need to roll again in future turns for this rule for this Monster. A failure indicates that the Warrior cannot shut out the meaning of what they hear, and suffers a -1 To Hit penalty with missile weapons and close combat weapons. Roll again next turn.

Finally, this rule has the opposite effect on other Cultists on the Board Section; so long as the Demagogue is on the same board section, all Cultists ignore the Break rule.

Chaos Magic is dangerous to wield for anyone other than a fully-fledged sorcerer. Each time a Warlock successfully casts a spell, roll 1D6. On a 1, the spell goes wrong and it targets a random Monster instead. The Warlock is included when determining which Monster is affected in place of the original target.

Roll 1D6 on the Following table: