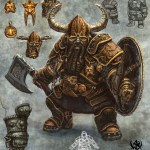 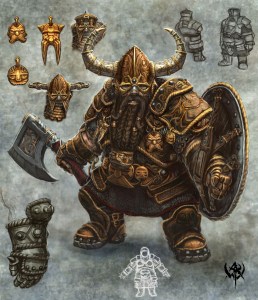 We’ve all been there: watching our precious Wizard or Noble get torn to pieces whilst the heavily-armoured Dwarf or Knight butchers their way through a heap of Goblin Spearmen that can’t even scratch them. Some Warriors can wear so much armour that they are invulnerable to damage caused by lesser Monsters like Skeletons and Goblins, even when there are hordes of them on the board. For Example, a Battle Level 1 Dwarf wearing Plate Armour and a War Helm, and carrying a Shield  from the Armourer in the Roleplay Book, has an incredible +7 Toughness bonus, for a total effective Toughness of 11. A ‘regular’ Monster like a Skeleton or Goblin has a Strength of 3 so they are unable to hurt Warriors with an effective Toughness higher than 8, leaving them as nothing more than fodder for a cleverly placed Warrior.

Here is a simple House Rule for evening things out a little. There are other, more involved House Rules for critical hits out there on the Web, but this little House Rule should be simple to remember and not interrupt the flow of play too much.

When a Warrior or Monster rolls a natural 6 To Hit, they will score a minimum number of Wounds damage equal to the quantity of Damage Dice they normally roll.

For example, if the Dwarf in the example above was hit by a Goblin who rolled a natural 6 To Hit, then the Dwarf would suffer 1 Wound despite the protection of all that armour. A Minotaur that hits on a natural 6 would score an automatic 2 Wounds, unless the damage rolled was higher. This represents a lucky strike finding a weak area like the eye-slits of a helmet or so on.