Gnoblar Fighters arm themselves with an assortment of broken bottles, swords, spear tips, false legs, fangweasels, pointy sticks and rusty daggers – basically anything they can lay their grubby little hands on.

Gnoblars are dumb but not too dumb to realise that they are no threat next to an ogre. They have perfected the skill of attacking warriors that are too busy fighting their ogre masters, darting between the Ogres’ legs and stabbing at ankles, knees and other tender areas. A Gnoblar in base contact with any Ogre may attack as if he had a spear. When fighting in this way he may use the WS of the adjacent Ogre and hits ignore 1 point of armour.

These particular Gnoblars have developed an uncanny knack for striking a warrior in the tenderest of tender places; all attacks made by a Groinbiter ignore armour 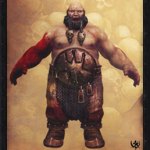 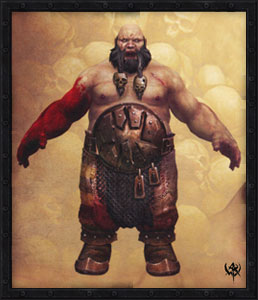 Far to the east of the Old World lie the savage Ogre Kingdoms, a land of eating and fighting. A single Ogre, with his massive frame and boulder-like gut, has enough brute strength to sack a village and an army of such monstrous warriors, the power to destroy empires.

Ogre Bulls – The term Bull is used for any adult male Ogre. Bulls make up the majority of any Ogre Kingdom. Big, brutish and extremely violent, a Bull is far taller than a human whilst retaining a massive girth and heavily set frame.

Ogre Ironguts – Ogre Ironguts are the Ogres of any given tribe that have the most status and the best weaponry. Although not markedly superior in strength than their fellows, Ironguts are afforded great respect, as they are usually hand-picked by the tyrant himself. So it is unsurprising that they are typified by their unshakable faith in their own superiority.

Ogre Leadbelchers – Few in number, these filthy and unhinged Ogres are equally obsessed with destruction and noise, and arm themselves with great portable black powder weapons called Leadbelcher cannons. These are gigantic guns, either scavenged from the remains of enemy artillery or earned as a reward from the great forges of the Chaos Dwarfs.

If an Ogre moves 3 squares or over to attack a warrior, it does 1 automatic S4 hit (1DD)

An Ogre Bull may use the ironfist to either gain +1A or +1T (The Games Master may choose at the start of each combat round, or randomise using a dice)

An Ogre may fire the cannon in the Monsters Phase. It fires in a straight line 2 squares wide and any Warrior in the path is hit on a D6 roll of a 4+, taking 2D6+4 wounds. The Ogre may reload by doing nothing for a turn, so long as there are no Warriors in base contact.